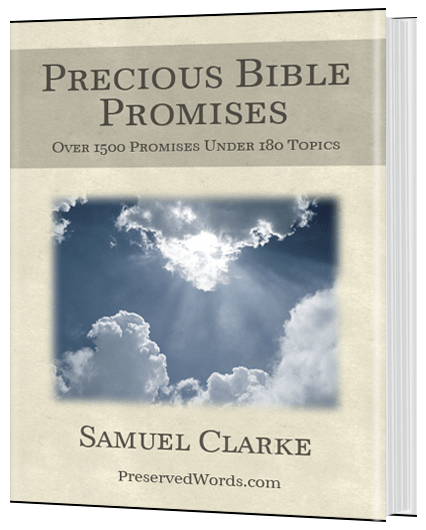 The classic resource of Bible promises that has comforted many over the centuries. As stated by Isaac Watts in the Introduction,

The worthy author of this collection, which I have long known with esteem and honor, has chosen to reduce all the most useful and important promises of the Word of God into order, and here set them before us. These are the most powerful motives of duty; these are the constant food of a living Christian, as well as his highest cordials in a fainting hour. And in such a world as this, where duties perpetually demand our practice, and difficulties and trials are ever surrounding us, what can we do better than to treasure up the promises in our hearts, which are the most effectual persuasives to fulfil the one and sustain the other? Here are laid up the true riches of a Christian, and his highest hopes on this side of heaven.

Samuel Clarke (1675-1729) was the compiler of this eminent book of Precious Bible Promises (1750). “Whereby are given unto us Exceeding Great and Precious Promises: that by these ye might be partakers of the Divine Nature” (2Pe 1:4). As an English academic, theologian, and preacher, Clarke would be found mastering Isaac Newton’s new system of the Universal Laws of Motion and translating an invaluable textbook to introduce and promote Newton’s position (1697), defending the Christian religion in A Discourse concerning the Being and Attributes of God, the Obligations of Natural Religion, and the Truth and Certainly of the Christian Revelation (1705), serving as a chaplain to Protestant Queen Anne of England (1705), translating Isaac Newton’s Optics (1706), expounding upon the Tri-Unity of God in his celebrated treatise The Scripture Doctrine of the Trinity (1712), refusing the secular post of Master of the Mint (1727) upon the death of Sir Isaac Newton (whom he would have replaced), and accumulating ten volumes of his own sermons (published posthumously); but, best remembered by many Christians is his compilation of Precious Bible Promises, which shows us that Dr. Samuel Clarke had not only a keen intellect, but a true understanding of the evangelical “faith which worketh by love” (Gal 5:6) and its attendant Promises. “Let him that glorieth glory in this, that he understandeth and knoweth Me, that I am the LORD which exercise lovingkindness, judgment, and righteousness, in the Earth: for in these things I delight, saith the LORD” (Jer 9:24).

There is no need to order this book. The links are below. If it is ordered, the same links will be provided.